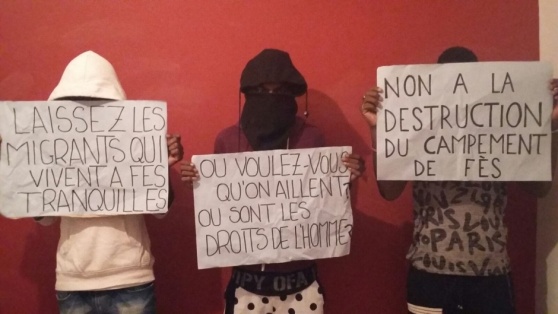 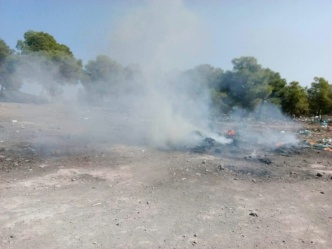 In the past month the repression and harassment of migrants living close to the border has increased, namely in Casiago, Nador, Tangier and Fes.

In Nador more than 400 Sub Saharan migrants, women, men and children, have been caught and deported towards the south of the country to cities such as Casablanca, Agadir and Tiznit.

During the raids, the “harlits” (the Moroccan auxiliary forces) destroy and burn down the shelters that the migrants live in, making their journey ever more difficult.

At the moment these raids are carried out four to five times a week.

At least nine people have died in one month in Nador: seven women drowned between Melilla and Nador after jumping into the water, when they were pushed back by the Spanish civil guard and then intercepted by the Moroccan navy.

The 24th of September, two people from Burkina Faso died after being attacked by the Moroccan auxiliary forces with tear gas. They were part of a group of six people trying to reach Melilla through a sewage pipe.

Since the beginning of this year, after a huge number of people tried to jump the fences surrounding Ceuta, with more than 1200 people successfully reaching the enclave, more than 600 other migrants were massacred. Amongst those several were badly injured, traumatised, raped and robbed, and more than 20 people have died, whilst others have still not even been identified to this day.

We have witnessed the abrupt change in the Moroccan policy to control migrants, which now makes it possible to imprison migrants and deport them directly to their countries of origin.

On the 20th of February a group of people attempted to reach Ceuta; 350 were successful, whilst others were detained. Two weeks later we got the information confirmed that one of our friends himself had been arrested on this day and imprisoned in Tetouan along with ten other people. In the prison were at least another 100 people who had been arrested under similar circumstances. After three months and some days in prison our friend and the other migrants were forcefully deported, without notice and with violence being used against them.

This is just a reminder that these actions continue, and for the moment we don’t know the number of migrants who are still inside different prisons in the country, but we have been informed that amongst those migrants imprisoned are even minors. We do not know for how long they will be locked up, but their situation is similar to the others, and some of them will be deported without anyone on the outside knowing about it.

The violence, the raids, the arrests and the deportations continue.

This month we have witnessed and gotten calls from migrants living in these apartments who have been arrested and forcefully evicted from their homes, without being given time to collect their belongings. After being arrested they were sent to the police station to verify their documents, and some were deported to Casablanca and Marrakech.

It has been some weeks since we received calls from migrants testifying that the Moroccan authorities paid a visit to the camp close to the train station in Fes, where almost 1000 Sub Saharan migrants live. They came to inform them that they need to leave within one month, without giving them any answer to where they could go. The forceful eviction of the camp if scheduled for the 8th of October.