Due to the dramatic situation at the eastern external borders of the EU,the Moroccan-Spanish setting tends to be eclipsed. But West and Central African migrants in the north of Morocco still suffer oppression and racist violence on their way to Europe. END_OF_DOCUMENT_TOKEN_TO_BE_REPLACED

Following here a non-exhaustive list of crossing attempts and acts of repression at the borders in May and June 2015. The information sources are added if possible. END_OF_DOCUMENT_TOKEN_TO_BE_REPLACED

END_OF_DOCUMENT_TOKEN_TO_BE_REPLACED

Despite a “reinforced” wave of repression, many people try to get to Europe, leaving from Morocco hidden in cars, trying to climb the fences around Ceuta or Melilla, or by boat (in 2015, 71 boats with 1260 migrants have arrived in Andalucia)
These crossing attempts result sometimes in human dramas, severe injuries or “disappearances” which are often not reported by mainstream media or by the authorities. Thus it’s not uncommon that someone alerts us about the disappearing of a migrant while trying to cross. But any further inquieries often remain in vain!
The repression organised by Morocco in cooperation with Spain and financed by the EU extends to the borders by an increasing militarisation, by real raids in the forests where the migrants seek shelter, in the markets (Soukh) and in the cities where migrants live. END_OF_DOCUMENT_TOKEN_TO_BE_REPLACED 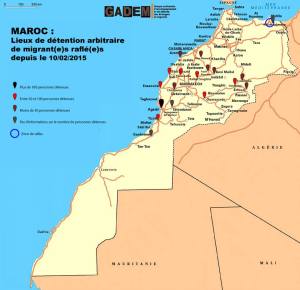 Engl and arabic below

END_OF_DOCUMENT_TOKEN_TO_BE_REPLACED

Some of the migrants have been living in Morocco for years. They wonder if they will live to see Europe, or if they will die trying.

Many have already been illegally pushed back, as well as being shot at, by Guardia Civil, Spanish police, after arriving within colonial Spanish territory on the African continent: Ceuta and Melilla. There is daily anguish at how hard life can be in Morocco, as the desperate and now cold conditions in forest camps isolate them from Moroccan communities around the Spanish cities. Others live in squats, rented apartments or small camps, in or next to an area, half-built, on the edge of Tanger.

2014 has been an unprecedented year for migration in Morocco. The 2013 migration reforms were said by many to be a sign of Morocco slowly coming to terms with migration changes. Its allying with the EU to increase the hardship of the border regime, now also increasing the numbers of Sub-Saharan migrants stuck in the country. Many migrants, though, have been sceptical, and seen the séjour citizenship as a dangerous option, that not only has a strong suggestion of empty promises, but also the risks of heavy sentences in Moroccan prisons, for either trying again to reach Europe, or for speaking out about cruelty received from agents of the Moroccan state. It is often perceived as an instrument of control, instead of one of support. END_OF_DOCUMENT_TOKEN_TO_BE_REPLACED

The 6th of February has become a common reference when talking about police brutality at the European border. On this day the Spanish Guardia Civil shocked many people by showing what means they are ready to put into practice in order to stop migration, this day leading to the death of at least 17 people. A group of Camerounese migrants, who were in the water that, have told us what they experienced that day. The following is a summary of their stories.

Early in the morning of the 6th of February a group of 400 migrants (mostly Camerounese) went down to the beach in Fnideq close to the border to Spain, and started swimming towards Ceuta. While doing so they were being attacked by Moroccan military police, but also Spanish police started to shoot with rubber bullets at the migrants while they were still at the Moroccan side, as well as at the people who made it to the Spanish side. They were shooting both directly at people and at the floating implements that some people needed because they were not able to swim. This caused several people to drown. Apart from that, there were Guardia Civil officers in a boat with a Spanish flag who were pumping tear-gas into the water as well as sailing over people.

There was a mass panic attack in the water when some migrants tried to continue making their way to Spain, while others tried to escape the bullets and tear gas by returning to the Moroccan side.
Officially 17 people are announced to be dead, but according to these Cameroonian people, more than 25 people died, and others are still missing. END_OF_DOCUMENT_TOKEN_TO_BE_REPLACED

The 4th of December was a day that will be remembered by many here in Tanger. A police raid in the Doha Boukhalef region caused the violent death of Cédric, a man from Cameroon. Exact details remain unclear but his body bearing fatal head wounds was carried over 2km from Doha Boukhalef in the direction of the city centre in a spontaneous manifestation by the migrant community.

Rising up and taking the streets in their hundreds, migrants marched demanding these deaths stop, carrying his body aloft so as not to let his death be ignored. They succeeded in their goal, and the clashes with police and racist Moroccans during the manifestation ensured that the city paid attention to what evil things had occurred in their own city.

When riot police blocked their path migrants broke through their lines time after time, and had the police on the run with stones and crowd charges. Well over a thousand young Moroccan men gathered to watch and some groups of them attacked the march with stones many times. Migrants, Moroccan bystanders and a chief of police were hit by these missiles.

A migrant house in the area of Houmat Chouk, a poor neighbourhood in the south-east of Tangier, was violently attacked last night, Tuesday 12th November. Two Senegalese men were hurt in the confrontations, during which local Moroccans swarmed and entered the house threatening with knives and other weapons. END_OF_DOCUMENT_TOKEN_TO_BE_REPLACED

The Senegalese Consulate in Rabat has backed the Moroccan authorities’ version of the events which led to the death of Moussa Seck, who died during a police raid of a house in Tangier on October 10th.

Migrants in Tangier see a tendency for the Senegalese Consulate to back the Moroccan authorities. This time the decision came despite witness statements that Moussa had been beaten by police before falling from a fourth floor window, and that the exact circumstances of how he came to fall are doubted.

It signals the end of the official response to the 24-year-old’s tragic death. The Moroccan authorities also evaded questioning about why police forces routinely raid the homes of sub-Saharan migrants, operations widely reported as involving violence and theft, and during which four people have died so far this year.

On the 10th of October 2013, another regular morning police raid was underway in a migrant house on the outskirts of Tangier. The police broke in through the front door and stormed through the building, waking everybody inside. The residents, being quite accustomed to this kind of treatment, took their time without panic.

Witnesses in the building claim that one resident, Musa Secky, was found in the bathroom washing his face before facing his authoritarian audience outside. The officer that found him told him that he should go downstairs now or he will beat him. Mr Secky replied that he would defend himself if the officer was to try to harm him, so the officer took it upon himself to start beating Mr Secky with his standard issue baton. Within a few seconds the brawl was over and sadly Mr Secky was dead. He had fallen from a fourth floor window and had died instantly. The witnesses had become afraid of the consequences when the fight had started so they began to leave, therefore were not sure exactly what had happened. The police claim that Mr Secky had jumped out of the window in a desperate attempt to escape. The residents on the other hand believe otherwise. END_OF_DOCUMENT_TOKEN_TO_BE_REPLACED

This is a report by a UK No Borders Activist currently in Tangiers on his experience of being at a Sub-saharan African migrants’ house in Tangiers while it was being raided by Moroccan Police, who are funded by the EU.

Having your door kicked open and police officers come storming into your home early in the morning is not an uncommon thing for a migrant household in Tangier. In fact this can happen at least once every week, so much so that the residents of the house will just leave the doors open most often just so they dont have to keep repairing them. The reason for this is to catch out any migrant that may be in Morocco without papers. If such person were to be found then they would be detained for up to 2 days before being taken to the nearest border, which for Tangier is Oujda, the border town close to Algeria. END_OF_DOCUMENT_TOKEN_TO_BE_REPLACED