Despite our continuing condemnations and publications via social media, we continue to witness ongoing harassment and violence towards Sub Saharan migrants at the borders. Increasingly in cities further away from the borders, women and children are becoming victims of violence and deportations alongside men men, something which we hadn’t been previously aware of happening. 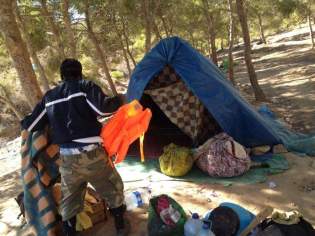 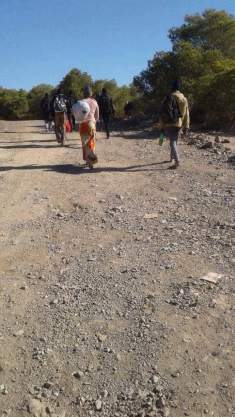 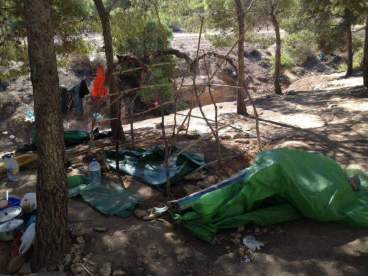 On Saturday the 11th of November 2017 at around 6am, a mixed unit of the Moroccan auxiliary force, national and local police, came with vans to the different camps around Nador where migrants are living (Bolingo, Zhountia, La Carriere etc.) They burned and destroyed all the tents and arrested migrants who could not escape: 70 in total, of which 57 were women and 13 men. After being arrested, they were taken to the police station in Nador, where they were registered and then deported by bus to cities further away from the border (Safi, Fes, Casablanca).

At around 7am on Monday the 13th of November they came back to the same camps, where they repeated their harassment of the migrants two days earlier, this time arresting 35 people (20 women and 15 men). Five of the women had already been deported the previous Saturday, but as they were unable to defend themselves, they were once more deported. Each was given half a loaf of bread, a tin of sardines and half a bottle of water, with nothing to protect themselves against the cold.

In the early hours of Wednesday the 8th of November 2017, 21 year old Guinean Aboubacar Diallo disappeared. His friends and family don’t know where he is, as he is not reachable by phone, and haven’t heard from him so far. Aboubacar was last seen at the police station in Nador, after he had been intercepted by the Moroccan Navy in the Mediterranean, where he was on his way towards Spain in a boat with 18 other people. After being intercepted, they were taken to the police station, from where some were deported by bus to Safi, but his friends confirm that Aboubacar was not in the bus with them. They don’t know if Aboubacar is still at the police station, in prison, or if he has been deported to his country of origin like many others before him.

On Monday the 13th of November 2017, we received a call from a woman who was able to escape the police, while she was at a roundabout with other women and their children, doing the Salam (asking for money) in order to survive. At around 10am the police came and arrested five women, who were taken to the police station and registered. They were forced to spend all day at the police station. At 6pm they were let out, and asked to tell the others that the next time they were arrested, they would be kept in custody for three days, and then deported.

Destruction of the camp

The authorities in Fes announced that the camp inside the city, where Sub Saharan migrants have been living for several years, would be destroyed on the 8th of October. However, according to comments on social media, the eviction never happened.

Instead, they decided to harass migrants in the streets and at roundabouts. Every time they were caught, they were forced to spend three days in custody, and then deported to cities far away. As they had left the camp in peace, people were beginning to forget about the announced eviction of the camp.

A month later, after the government restructure, the authorities once again came to negotiate with people living in the camp, proposing to give them each a sum of money to find other accommodation with. This was clearly not possible, as the amount was far from sufficient to meet the needs of the number of people in the camp, regardless of whether they were looking for accommodation locally or elsewhere.
People are not living in the camps because they wish to, but rather because:
1) They feel safer when they stay together. The proposal by the authorities aimed to separate people, in order to control and restrict their freedom of movement.
2) They didn’t come to stay in Morocco but to cross, something that is getting more and more difficult. In addition to the sea and the fences, they also have to fear violence from the auxiliary forces controlling the Moroccan side of the fence, as well as from the Spanish guardia civil, who catches everyone who manages to get past the auxiliary forces and the fence, beats them, and then pushes them back to Morocco through the small gates in the fence.
Other migrants are imprisoned for three months, and then deported back to their countries of origin.

This is also the situation between Casiago and Tetuan, where violence and the harassment of migrants continues in the forests where many people live in camps, as well as in other places close to the fence keeping people out of the Spanish Eldorado.